Yesterday, I was sitting aboard Southwest flight 1982 ready to come back home.  The plane was pretty full already when I got it, so I was sitting in one of my favorite seats 9D (I’ll tell you why some day).  As I was waiting for my wife to board behind me the flight attendant came up to talk to the passenger in front of me and hit the back of the seat.  To my surprise the latch popped out of the seat and the tray table was soon in my lap.  I tried to push the latch back in, but the flight attendant told me they would have to get someone from maintenance to look at it.

The flight was full and that meant if they couldn’t “fix it”, we were getting off the airplane.  That would have been unfortunate.  Although not having a working latch isn’t a big deal to us.  It’s a big deal to the FAA who thinks we are incapable of lifting a tray table to escape a burning airplane.  I suppose this makes sense, so it had to be fixed.

The maintenance guy showed up pretty quickly though with new parts in hand.  He asked to have a seat where my wife was now sitting.  She went up to the front of the plane while he worked. 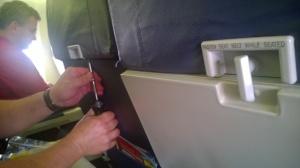 While he was repairing the latch, I got to talking to him and had a good conversation.  It turns out this particular issue happens about once a day, especially on the older 737-300 and 737-500 series aircraft.  As much as I fly, I am surprised I have never seen it happen.  Before he worked for Southwest, he was a technician in the Air Force.

He quickly got our latch repaired and our tray table was no longer going to cause any harm.  Our shiny new latch worked great. 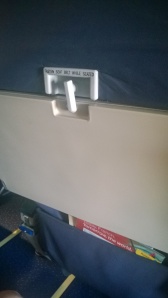 I thanked him for his service and we got on our way.  At this point, we were about 80 minutes late taking off.  It only took him 10 minutes or so to repair the issue though.

Lesson to be learned.  If the tray table in front of you breaks.  Make sure no one sees it or you’re going to be late.  Just be prepared to lift it up in an emergency situation. :)